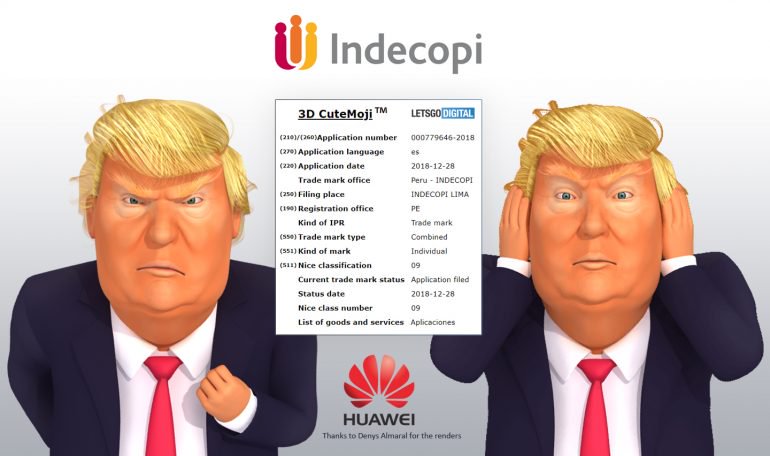 As usual, we expect to start seeing clues and leaks regarding the flagship models most of the top OEMs plan to roll out for the first half of 2019. Huawei is known to launch the P30 models within the initially quarter and this year may going not be different. Last year’s P20 series arrived out with a number of innovations and the P30 series isn’t likely to be any alternative. That is why we are excited When it comes the spotting of a new trademark application what Huawei filed on December 28 in Peru.

The trademark is for a feature known as “3D CuteMoji” and the application was submitted by an intermediary called Indecopi and based in Lima, Peru’s capital. The trademark is classified as; ‘computer programs, information, processing equipment, downloadable software’. As the name implies, the trademark is for a new set of 3D emojis what could going feature on Huawei’s next flagships.

Emojis are not necessarily fresh but because Apple unveiled its own a lot more realistic emojis famous as Animoji onboard the iPhone X in 2017, the feature has become increasingly well known. Samsung was soon to follow with its own known as AR Emoji and Asus chose the name ZeniMoji for its emojis. Huawei equipped last year’s P20 series with an AR lens which appears to be like a variation of the emoji from Apple and Samsung. However, the AR lens feature was replaced on the Mate 20 Pro with 3D Live Emoji moreover called Qmoji. The Qmoji will allow users to pick an avatar, record a creative message and send it to friends or colleagues. The 3D CuteMoji may hardly be too alternative except perhaps it will contain more human characteristics as seen in the picture of Donald Trump with 2 different facial expressions. We’ll have to wait till the P30 series are introduced upcoming month during the Mobile World Congress (MWC) 2019 to You could learn more about the function. Between, who else found it hilarious that Huawei chose the caricature of Trump, the company’s nemesis to depict the feature?