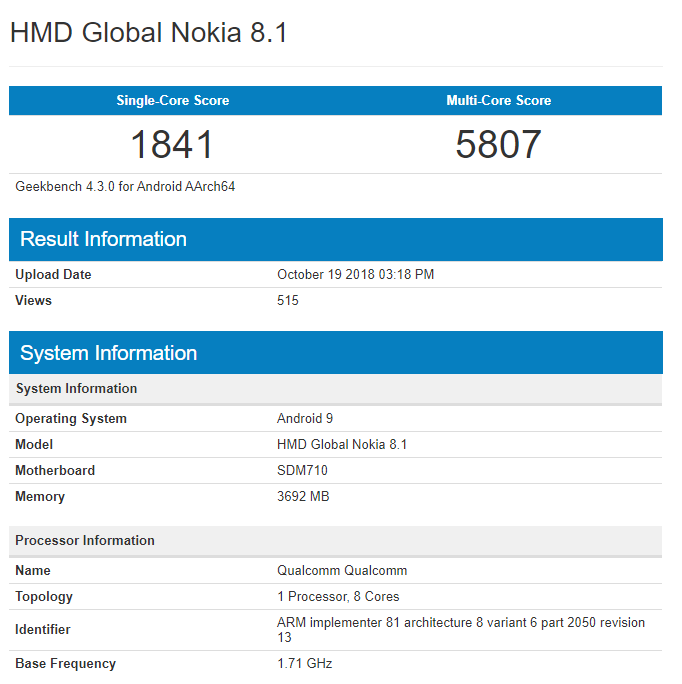 The Nokia 8 introduced last year as the initial Nokia flagship smartphone following the takeover of the brand by HMD Global Oy. The device got lukewarm reviews with complaints about some missing features these types of as an AMOLED display and a higher IP rating etc. It obtained a refresh at the beginning of the year called the Nokia 8 Sirocco with the same processor however a fresh design and style, better panel, and a bigger battery. A successor has shown on Geekbench as the Nokia 8.1 and it seems to be it won’t be a flagship.

The Nokia 8.1 was benchmarked yesterday and the site displays some of its key details. If you were expecting the Snapdragon 845, you could have to wait for the Nokia 9 or maybe a Nokia 8.1 Plus if there is anything such as that as the Nokia 8.1 is powered by the Snapdragon 710 chipset. The upper budget chipset is paired with 4GB of RAM.

Geekbench In addition shows the telephone will run Android 9.0 out of the box. That must placate these who are disappointed about the less powerful chipset. The Nokia 8.1 scored 1841 facts in the single-core test and 5807 facts in the multi-core test.

This is the initial time we are learning of the Nokia 8.1, so there is still a large amount we don’t know. Hopefully, far more details will surface in the approaching weeks.