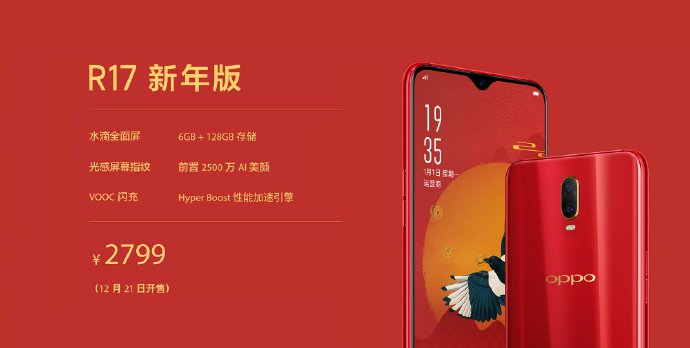 As OPPO had established in the previous week, it has released the New Year’s editions for OPPO R17 and R17 Pro phones through a dedicated event in China. In terms of specifications, both phones carry the exact same specifications as their regular variants. On the other hand, the R17 and R17 Pro New Year’s Edition have unique design since they sport red bodies that symbolize the New Year. According to the Chinese calendar, 2019 is the year of pig. Hence, the Chinese manufacturer has engraved a golden logo of a piglet on the bottom of the rear shells of both phones. Also, these phones are running on the specialized designed New Year themed UI. 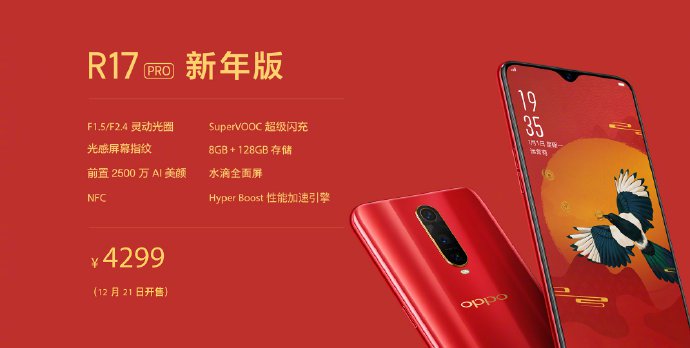 The glass rears of the OPPO R17 and OPPO R17 Pro New Year’s Edition have warm red color with gradient effect. The paintjob has been inspired by the traditional paper-cutting art of China while the golden of the piglet has a floating effect.

The OPPO R17 New Year’s edition is fitted with a 6.4-inch AMOLED display that produces FHD+ resolution of 2340 x 1080 pixels. It is fueled by Sd 670 chipset. The waterdrop notch of the display is the home for the front-facing 25-megapixel selfie camera. The rear shell of the phone has a 16-megapixel + 5-megapixel dual camera setup. The handset is backed by a 3,500mAh battery and it includes 6 GB of RAM and 128 GB of storage. Other features of the smartphone include support for VOOC charging and Hyperboost technology.

The OPPO R17 Pro New Year’s edition is equipped with a 6.4-inch AMOLED waterdrop notch screen. It is driven by the Snapdragon 710 chipset. On the front is a selfie shooter of 25-megapixel. A 12-megapixel + 20-megapixel dual camera setup resides on the backside on the bottom of the phone. It receives power from 3,700mAh battery and is packed with 8 GB of RAM and 128 GB of native storage. The OPPO R17 Pro New Year’s edition also features NFC, SuperVOOC charging and HyperBoost technology.

Honor 10 Lite now in the world for pre-order in Pakistan, UAE, and Saudi Arabia