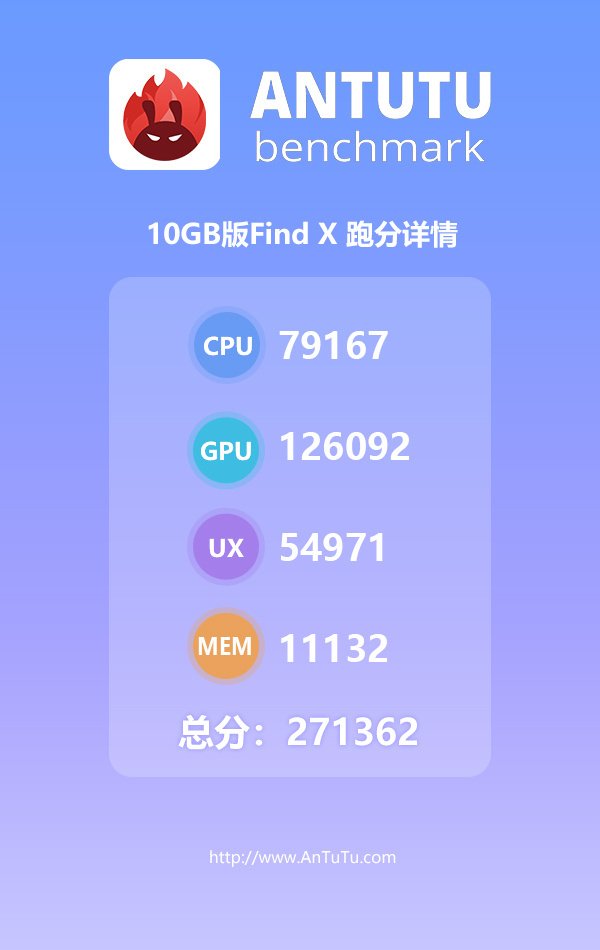 Yesterday, we noted that Oppo is now working on a 10GB RAM variant of its flagship smartphone Discover X. We even confirmed the development with the TENAA specs listing appearance the 10GB RAM model with 256GB of internal storage.

Now, AnTuTu benchmark score of the Oppo Discover X 10GB RAM model has surfaced online. But, the product scores just 271,362, which isn’t as high as one would be expecting. But given that the benchmark score is in an engineering unit, we expect to look at better score in the final retail unit.

Currently, the phone comes with 8GB of RAM and two settings for internal memory — 128GB and 256GB. We are not expecting to view a drastic difference in terms of overall performance in the 10GB RAM variant compared to the original 8GB RAM model.

Apart in the upgrade of 10GB RAM, rest of the technical specs of the next Oppo Find X model remains the similar. It attributes a 6.42-inch AMOLED screen with a screen resolution of 2340 x 1080 pixels and 19.5:9 aspect ratio.

The highlight of the phone is that it comes with a motorised slider what houses the 25-megapixel front-facing digital camera as nicely as 3D face sensing sensors, what the manufacturer prefers to call ‘O-Face Recognition’. Oppo claims that the facial unlock is 20 times safer than fingerprint recognition for unlocking the telephone.

Under the hood, the gadget is powered by Qualcomm‘s flagship Sd 845 processor, coupled with Adreno 630 graphics processor. As for the rear scanner, it comes with a dual sensor option that consists of a 16-megapixel + 20-megapixel sensors on the back with OIS and AI features.

The phone runs on ColorOS 5.1 AI Smart custom UI based on Android 8.1 Oreo operating system, and us powered by a 3730mAh battery. We be expecting the 10GB RAM model to come with SuperVOOC fast charging support.