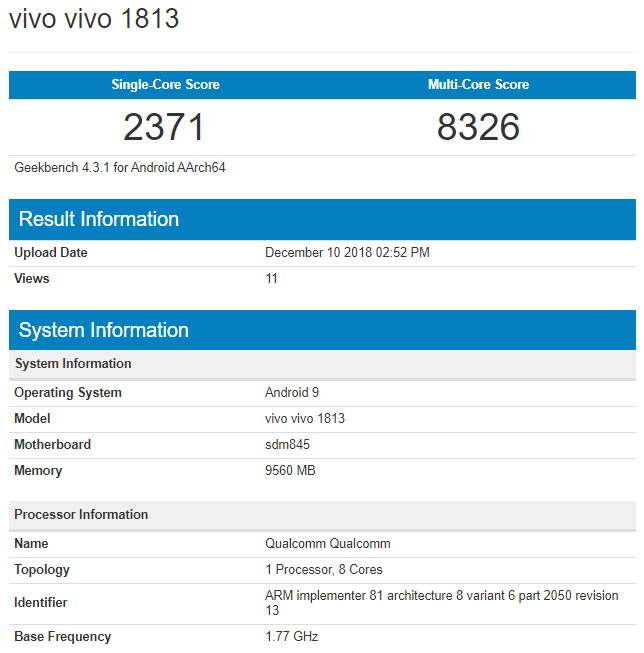 The Vivo NEX Dual Panel Edition released today as the first Vivo cameraphone with 10GB of RAM. A Geekbench result has revealed it won’t be the only one for long.

An unknown Vivo phone that moreover has 10GB of RAM and a Sd 845 cpu has been benchmarked what confirms it is a flagship. The device was seen on the benchmarking site last day under the name “vivo vivo 1813” which is quite alternative from the benchmark name of the Vivo NEX Dual Panel – vivo V1821A.

However, the model number is exact same to that of the Vivo Z3i (V1813A) and Vivo Z3 (V1813BA). So does this indicate this a pro version of the Vivo Z3? Looks very likely. The Z-series was released this year and has the Z1, Z1 Lite, Z1i and Z10 as members such as the aforementioned Z3 and Z3i.

The phone scored 2371 facts in the single-core test and 8326 in the multi-core test. Geekbench Furthermore unveiled it is operating Android Pie.

The Vivo NEX S and Vivo NEX Dual Panel Edition are the 2 Vivo flagships with a Sd 845 chipset but it appears to be they will early be joined by a third phone which may launch as the Vivo Z3 Pro.